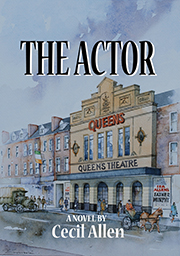 Prologue: A young man attends the funeral of actor Jim Brevin. Many are startled by the young man’s resemblance to the deceased – as far as everyone knows, Jim never had a son.
Part 1: Jim Brevin is born in 1898 to a middle-class Dublin family. He is a headstrong, independent child who has a poor relationship with his father. At Christmas, Jim and his family attend a pantomime and Jim is captivated by the magic of theatre. Buy Book Here

America gained her freedom in a nine-year-war by fighting three-dozen battles from Georgia to Canada, and hundreds of engagements on the high seas, occurring along the coastlines of North America, the Caribbean, the British Isles, and Western Europe. Buy the Book!

A year-by-year family saga, told by hard-of-hearing Rory O'Donnell, takes the reader from the close of WWI through Prohibition, the Great Depression to the end of WWII. Buy the Book

Before the dawn of written history, horsemen from the steppes of Russia swept across the European continent settling initially in Germany's Hartz Mountains. Buy the Book
Following their their conversion by priests from the British Isles to the Druid religion and laws, the Celts overran a swath of Europe from the British Isles southeast to Turkey, which they ruled for a thousand years.
In addition to bringing iron to the continent, the Celts invented steel, the spoked wheel with its iron tire, and the iron plow, which enabled European nomads to settle in communities.
In 387 BC, they defeated the Roman Army and invaded the eternal city. This epic battle dramatically changed the course of history. The Celts are truly the Founders of Europe.
This is their story.