In the tenth century, the Norsemen assault the minor relatively peaceful Irish Clan. They pilfer, rape, and randomly kill without a second thought. Observing the cruel attack in shock is a young lad, Brian mac Cennedi. He vows that one day there will be vengeance for the wanton death and destruction that the marauders brought to his clan.

Veteran historical author Morgan Llywelyn retells the colorful life story of revered Irish monastic saint Brendan the Navigator in the form of a personal journal, written by an elderly Brendan, interspersed with third-person glimpses of the Great Voyage he undertook with 14 monks to find the fabled earthly paradise of the Western Sea, the Isles of Blest.

The Irish Century series is the story of the Irish people's epic struggle for independence through the tumultuous course of the twentieth century. Morgan Llywelynís magisterial multi-novel chronicle of that story began with 1916, which was followed by 1921, 1949, and 1972. It now concludes with 1999: A Novel of the Celtic Tiger and the Search for Peace. 1999 brings the story from 1972 to the disarmament talks and beginnings of reconciliation among the Irish at the end of the twentieth century. 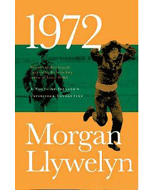 Llywelyn has given the volumes in her Irish Century series, which chronicles the significant periods and events in Ireland's resistance to and independence from British rule, titles corresponding to momentous years; the first series installment, 1916 (1998), was followed by 1921 (2001) and 1949 (2003). The author's chief success in these volumes lies in her ability to create characters from a previous time who possess contemporary vibrancy and viability. Readers who have been following the sequence will appreciate the continued familial connections from one novel to the next, and this latest one sees explosive issues in Northern Ireland culminating in 1972 on Bloody Sunday in Derry.