With the tragedy of Easter 1916 behind them and spurred on by the euphoria born of England's willingness to confer after months of bitter warfare, Irish republicans sense they are finally on the verge of trimuph over their centuries-old foe. Ireland's freedom is just around the corner or so it seems.

But almost overnight the green hills of Ireland turn red again--blood red--as the bitter residue of Anglo-Irish politics unexpectedly erupts into unholy civil war: the repercussions of which are destined to sully the dream of Irish unity for years to come. This work of historical fiction continues the chronicle of Aran Roe O'Neill, a fictional Irishman, and his tenacious comrades, both real and imaginary. Together they reluctantly renew their struggle for Ireland's long-denied independence from England. Their action is triggered by the divisive treaty Dublin's fledgling government negotiates with members of London's parliamentary leadership. 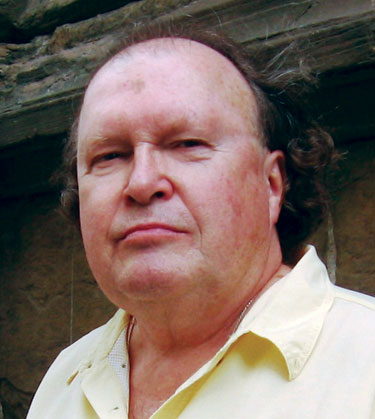 Born of stout Irish, Scottish and English stock, Cathal Liam writes short stories, poems and Irish editorial commentary for publications in the United States and Ireland. Those familiar with his work know he writes from an Irish point of view that is imbued with nationalist underpinnings and republican overtones. Through Cathal enjoys speaking and reading to interested groups, he carefully guards his privacy, preferring 'the quiet life.' When not involved in some research or writing project, he reads, travels, gardens and spends time with his wife in their present-day Cincinnati, Ohio home.

His successful first novel, CONSUMED IN FREEDOM’S FLAME: A Novel of Ireland’s Struggle for Freedom 1916-1921, initially published in hardcover in January, 2001, was reprinted three months later. In 2002, the title was printed twice in softcover and a third time in October, 2004. The story weaves fact and fiction around the exploits of a fictional young Irishman, Aran Roe O'Neill, and his friends, both imagined and historical, during twentieth-century Ireland's most dramatic and historically significant five-year period. As part of ForeWord Magazine's 2001 Book-of-the Year honours, the book received a bronze medal for historical fiction.

In June, 2003, his second book, FOREVER GREEN: IRELAND NOW & AGAIN was released. This collection of writings ofters a rich stew of imaginative stories, political commentary and original poems. It has since been reprinted.The book's stunning cover, a painting by renowned Irish-American artist Edmund Sullivan, captures the timeless beauty of Ireland. It won ForeWord Magazine's honorable mention award for Travel Essays in 2003.

His newest effort, BLOOD ON THE SHAMROCK: A Novel of Ireland's Civil War, is the sequel to CONSUMED... It resumes the chronicle of Ireland and of Aran Roe O'Neill during that most divisive yet politically momentous period, 1921-1924. Though the Irish Civil War was only a tragic ten-month episode, its build up and aftermath still sullies Ireland's dearm of national unity. Besides describing the dramatic historical particulars underpinning this internecine conflict, Cathal Liam's book takes issue with Eamon de Valera's contradictory role during the run-up to the Civil War and regards Michael Collins's contributions in helping create the modern Irish state as fundamentally important.

What Others Are Saying About BLOOD ON THE SHAMROCK:

A Novel of Ireland's Civil War

"The follow-up to his critically acclaimed novel, Consumed In Freeom's Flame, protagonist and fictional Irishman, Aran Roe O'Neill returns in this historically accurate factional tale of Ireland's Civil War. As one of Collin's inner circle, the newly married protagonist sees his own life unravel along with those around him as [Cathal] Liam's superbly researched book brings alive one of Ireland's darkest hours. Armed with murderous subplots, along with romance, heroism and betrayal galore, this is certainly one of the most dynamic and enjoyable retellings of the Irish Civil War that I have ever read." Joe Kavanagh, Irish Connections magazine, (New York, NY), Autumn, 2006 (Volume 7/No.3)

"It's always encouraging when customers buy a book, then return looking for more by the same author. Many readers who ordered the historical novel Blood On The Shamrock from our latest catalog are coming back for the author's [Cathal Liam's] earlier novel Consumed In Freedom's Flame." Irish Books and Media newsletter, (Minneapolis, MN), November, 2006

"Through Cathal's strong, well drawn characters the important personages and events that shaped Ireland's history from the early part of the 19th centruy through the years of civil war ending in the mid 1920s become vivid and alive. Many famous scenes from Irish history are described in such detail that the reader can sense the emotions that must have been felt at the time. History aficionados will appreciate the scholarship and research that support the narrative. Quotations from Irish patriots, and passages from songs and poems precede each chapter, helping to invoke the spirit of the times." Mary Smith, The Richmond Claddagh, (Richmond, VA), October, 2006

"Blood On The Shamrock is the sequel to Consumed In Freedom's Flame, Cathal Liam's [new] historical novel about Ireland's Civil War in the 1920's. Fictional hero Aran Roe O'Neill continues in the struggle for Irish self-governance and independence. In this complex network of loyalties and treachery, he faces foes both from within and outside the ranks of Irish patriots. For those who may have missed the first novel, Blood On The Shamrock stands very nicely on its own as a great historical novel. It is greatly enhanced by an introductory list of cast of characters, in order of appearance by chapter, the prologue, which quotes the Declaration of Arbroath and Proclamation of Poblacht na hEireann, and the glossary. Frequent quotations from poems and songs also help to place the novel's tone and action core. The reader will quickly become caught up in the life and cause of Aran, which is 'at one with the cause of Pearse, Connolly and Collins.' Twentieth century Irish political reality evolves through the pages, with many references to its cultural and historical heritage. Blood On The Shamrock is immediate and personal; it will serve to enlighten many readers about the latter days of the Irish Civil War. Ending in the 1960's, Blood On The Shamrock is a complete read in and of itself. But one wonders (and hopes!) if there will be another novel to the present day?" Midwest Book Review, (Oregon, WI), September, 2006

"Cathal Liam takes the central character of his War of Independence novel Consumed In Freedom's Flame and carries the story onward through the tragic months of the Irish Civil War. In his Forward, Mr. Liam remarks on the fact that very few serious attempts have been made to take this terrible and convoluted period of Irish history into the realms of fiction. He lists a mere seven writers form Sean O'Casey in 1924 to Morgan Llywelyn in 2001. Approaching his task strickly, he lists his cast of characters in some detail, between the historic personalities who appear and his fictional central characters who carry the story forward. Mr. Liam sticks closely to historic fact in dealing with major events and includes a glossary and a good bibliography. He is one of few novelists who considers footnotes detailing the factual record as necesary to his story. But then, this is a story of which many Irish families have a version...God grant peace to them all." ...from a review by Mary O'Sullivan, Ireland of the Welcomes, (Dublin, Ireland), September/October, 2006

"When I began this review, I was afraid I wouldn't do justice to a book of this scope and power. How is [Cathal] Liam able to capture that period [Ireland's Civil War] so well? I believe there are two answers to that: by scrupulous research and by giving life to the many heroic sized people of that age. Cathal Liam has created such realistic and believable fictional characters that they seamlessly interact with the historical ones. Blood On The Shamrock...is a book of great proportions. It focuses on the slice of Irish history from 1922 to 1923, but it encompasses the complexities, frustrations, beauty and mystery of human actions." ...from a review by Frank West, Irish American News, (Chicago, IL), August, 2006

"The story opens with the ambush at Beal na Blath and then looks back to the events leading to the rejection of the Treaty and the outbreak of civil war. It is apparent that the author has carried out extensive research to convey a feeling for the period. Interweaving actual characters with fictional companions throws an interesting light on the events and on the emotions that might have been experienced by such as Michael Collins and Cathal Brugha, and as a sequel to an earlier novel it achieves a continuity of narrative." ...from a review by Pauline Ferrie, The Irish Emigrant, (Galway, Ireland), July, 2006

"That's where I love this book. While I do enjoy reading history, it can be bland at times. Facts, dates and names are important, but can be rough on the eyes. Liam mixed it [fact and fiction] to perfection. When I picked up the book, my main desire was for the history. Michael Collins, Eamon de Valera, the [Anglo-Irish treaty] negotiations with the British and the civil war were the topics that interested me. I wanted more knowledge of the period. I was pleased to discover that was what Liam pushed." ...from an interview by Scott Powers, Irish American News, (Chicago, IL), July, 2006.