In early medieval Europe, Viking marauders are pouring down from the north. Steppe riders threaten from the East and Islamic invaders are surging up from the South. After his father is slain defending their home, a little Irish boy and his young mother are taken in bondage to Norse-controlled Dublin. His mother is later murdered by a jealous Viking matriarch and the orphan is beaten and starved for years before being rescued by Irish warriors on the eve of the millennium, January 1st, 1000 A.D.
Buy Book Here!
Several years later, as more Viking invaders from across Europe storm into Ireland, her aging king, Brian Boru, must somehow protect his nation. Nordic sagas tell us an obscure and unlikely hero arises to crush the enemy and save his people. Wolf the Quarrelsome leaps into history as a nightmare to the Norse and avenger for the Celts. This is Wolf’s story spanning 15 years and leading up to an underrated and arguably the most decisive battle of the Middle Ages. It is also the story of a young woman who develops a vast network of female spies and two young Irish men who lead medieval special operations forces.

“A little known but momentous medieval battle and the few years preceding it, along with memorable characters drawn from the Irish annals and Norse sagas will thrill avid fans of historical fiction.”
Steven Pressfield  - "The Legend of Bagger Vance"

"Echoes with the explosive clash of axes and swords interwoven with tales of first loves. Howley has delivered an epic of heroic combat, romance and high adventure.”
Mack Maloney - "The Wingman series"

"Weaves a tale full of characters, causes and plots that more than rivals Game of Thrones. And its backdrop is real - the chaotic and complex early medieval world locked in a clash of cultures and values."
S.W. O'Connell - "The Patriot Spy"

"...Norse invaders of Ireland discover that the only thing bigger and more badass than a heavily-armed band of Viking beserkers is a man known only as Wolf the Quarrelsome."
Ben Thompson - Badass of the Week

" In the grand mythmaking tradition of Bernard Cornwell, here is a medieval epic of Irish warriors and Viking raiders, filled with high adventure, bursting with characters, and bathed in the atmosphere of ancient Ireland."
William Martin - "Bound for Gold"

"This is a rare book. If I tell you every part of it, you'll still read it. One of the best books I ever read about a battle most know nothing about despite directly impacting our lives today."
Richard "Snake" Jackson"

About the Author
Thomas Joseph Howley, born in Boston to an Irish immigrant family, is a retired U.S. Army officer. He began in tanks in Armor branch and transferred later to Military Intelligence, spending the bulk of his career abroad, frequently supporting or leading counter-espionage and counter-terrorism operations.. Key tours of duty included U.S. Special Operations Command and as the only U.S. officer on the primary staff of the United Nations Protection Forces (UNPROFOR) in former Yugoslavia during the height of the civil wars there. 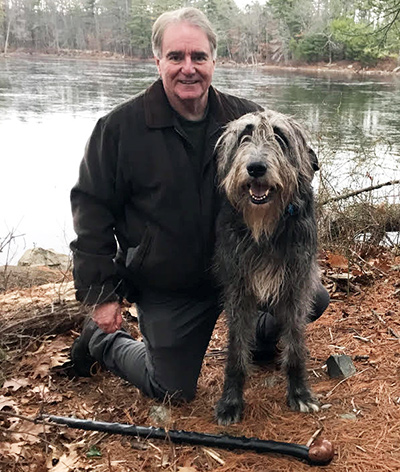 Earning a Master’s Degree in Management, after military retirement he was employed as a civilian operational intelligence analyst supporting U.S. Defense, Federal Law Enforcement and the Intelligence Community. In the course of his career, he has deployed to or supported security and intelligence operations in every continent except Antarctica.

With an extended Irish family on both sides of the Atlantic, and his training and experience in intelligence and military matters writing about Clontarf was a natural extension of a life-long interest. He lives in New Hampshire with his wife where he is struggling through his sixth year of Irish Gaelic language studies. When not working on a project or in the gym, he can be found making his way through the trails in the deep New Hampshire woodlands with an Irish wolfhound at his side.