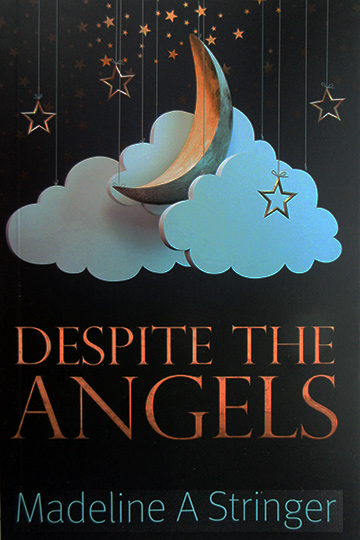 Synopsis
Have you ever felt you know someone already, even though you only just met? Maybe you knew them in another life.... Lucy and David, who live in modern Dublin, first knew each other in Ancient Crete. They had a baby girl, but disaster struck, and their guardian angels have been trying to reunite the little family for 4,000 years.

Despite the angels' attempts to be understood, humans often do not hear, and unwittingly can waste whole lifetimes....
Now in Dublin things are still not going to plan - Lucy is too young, and David is marrying someone else. Angels are optimists, so they are re-organising, but - Humans must listen to their angels.
Buy Book Here!

About the Author
Madeline Ann Stringer was born in Dublin, and has lived here all her life. Her other love is France, which appears in her book as one of the historical 'flashbacks'.

She trained and worked as a doctor, in womens' and alternative medicine. One of the alternative modalities, hypnotherapy, introduced her to the concept of past lives. She always enjoyed playing with words, in fact  winning a prize at about 11 years old, in a competition to finish a story, run by the "Puffin Club" (Puffin is the children's section of Penguin Books). Later she started to write more seriously, and finished Despite the Angels about 7 years ago. Her next novel should be published later in 2020, or early 2021.

Writing is a much better fit for her than being a doctor, She can get totally lost in her characters' lives, in fact they become real, and sometimes take over! The human characters in Despite the Angels are fairly typical of the  Dublin middle-classes, and the book gives a good feel of that part of Ireland in the 1990s.

Madeline Stringer has also written one-act plays, two of which have been successfully performed in amateur competition in the All-Ireland One Act Festival, and Bray One Act festivals. The plays are called Rhyme for Reason, and Two Wrongs. More information on these can be found Here!