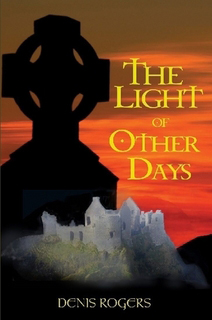 In this story we hear again echoing voices from a forgotten past.  In the late 1600s in the dying light of Gaelic Ireland, Hugh O’Neill, Earl of Tyrone, led the northern chieftains in a last brave struggle for faith and fatherland; to rid Ireland of an encroaching English influence, and to retain her ancient Celtic way of life. At the time of the Tyrone Rebellion the northern part of Ireland, together with the Western Isles and Highlands of Scotland were the last remnants of a 1500 year old Celtic culture. The western isles furnished a cadre of elite mercenary warriors who fought for these northern chieftains.
The author was born in the north west of Ireland, in the area central to his story, and in his early years walked among relics of that forgotten past. As a child he stood with his parents on the old bridge at Ballyhannon to gaze at the falls of Assaroe and the site of the nearby fifteenth century O’Donnell castle.  The Falls no longer exist, replaced in the 1950’s by a hydro electric dam. A market yard now stands on the site of the castle.
As a schoolboy he rambled through the old Maguire castle in Enniskillen, once the stronghold of Maguire chieftains, later the home of two of the oldest regiments in the British Army, and now a museum.
With his parents he made an annual pilgrimage to the Holy Well close by Abbey Assaroe, a twelfth century Cistercian Abbey, --  and left votive offerings by the well,  as had their pagan ancestors.
This book is a ramble through Irish history. It is interspersed with chapters relating to modern day events that serve to link Ireland’s past to Ireland’s present, and that will acquaint the reader with how those events of the 1600’s have had such an impact on modern day Northern Ireland.

Denis Rogers is a native of Belleek, Co Fermanagh, Northern Ireland.  He left Ireland in the late 1950s and served as a navigator for six years in the Royal Canadian Air Force.  After returning to Ireland he attended Galway University and qualified as a Doctor.  He then went back to Canada and settled eventually in Sechelt, British Columbia, where he has practised as a GP for over forty years.  His wife, Agatha, is a native of Co. Galway, and he has three sons – David, Michael and John.

Denis’s love for his native land shines through every page of The Light of Other Days.  He writes about an area in West Fermanagh, South Donegal, Leitrim, Cavan and Sligo with which he would have had intimate knowledge as a young boy and teenager growing up in the area.  His knowledge of Irish History is unsurpassed and his prose has a lovely lyrical quality not frequently encountered in a first-time novelist.  He tells a great story and his dialogue has a humour, an authenticity and a ring of truth that makes the narrative entirely credible.