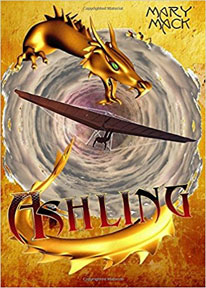 Book Description
Ashling is an Irish-mythology-based epic fantasy adventure novel. It has been compared to Lord of the Rings, Narnia, The Hobbit, Game of Thrones, Harry Potter, The Hunger Games, Beowulf, and Brave (Irish Film Board Readers Reports, August 2015). One literary agent even described it as having “…shades of Avatar.” Buy Book Here! or Here! and wherever books are sold worldwide.

The world of Ashling has been woven together from various global myths and histories, the scientific disciplines of geology and physics, and insights gleaned from Plato’s writings. Biblical history was seamlessly combined with Viking, Celtic, Greek, and Roman mythology to form a unique explanation for the origins of gods and demigods.

To recreate the world that young Ashling finds herself in circa 1150 B.C., the author drew heavily from some of Ireland’s earliest manuscripts, a partial list of which includes Leabhar Gabhála [The Book of Conquests of Ireland] by the sixteenth century Irish cleric Micheál Ó Cléirigh (1575-1643); the twelfth century tome Annala Rioghachta Éireann [Annals of the Kingdom of Ireland] by the Four Masters, translated in 1856 by John O’Donovan; the twelfth century narrative Agallamh na Seanórach [Colloguy with the Ancients], translated by Standish Hayes O’Grady; The Story of the Irish Race, by Seumas MacManus (1921); and The Fians; Stories, Poems, & Traditions of Fionn and His Warrior Band—Collected entirely from Oral Sources by John Gregorson Campbell (1891).

The Irish word aisling means dream, or vision. This story is the extension of a dream the author had one night, which her children demanded she write down and finish. The resulting feature film script won Best Fantasy Screenplay in the Table Read My Screenplay competition in January 2015, out of nearly 1,000 entries worldwide.  When the script was submitted to the Irish Film Board for consideration in April 2015, the consensus was that while Ashling was “visually stunning” and would be an epic family film, there was too much risk involved in producing such a costly film unless it was based upon a novel with an established fan base. So, Mary decided to write the novel which was finally published in March 2017.

The screenplay was a finalist in the 2016 Wexford Film Festival (Ireland), and was nominated for the Culture & Heritage Award during the 2016/2017 Fresh Voices Screenwriting Contest (Hollywood), where it also reached the quarterfinals.

March 31, 2017 -- Mary Mack's award-winning screenplay has been adapted to novel format at the suggestion of the Irish Film Board. If the novel garners a popular fan base, the Irish Film Board has expressed an interest in producing the script as an epic family adventure film.

Book Synopsis
“Fly, Daughter of Cain! Cross the skies on your golden dragon. Sound the death knell for the enemies of our people!” The old tinker's words echo through the ages as Ashling MacGillycuddy's hang glider plunges through a quantum portal in the skies over Galway’s Lough Corrib.

Mere weeks away from graduating with a university degree that she hopes will erase the stigma of being one of Ireland's Travelling People, Ashling is summoned by an ancient prophecy and catapulted thousands of years into the past. After crash landing in the Connemara Mountains she is befriended by a band of outcasts who prepare her to survive in this unfamiliar land where Fomorian Giants are battling Elves of the Tuatha Dé Danaan for lordship over Ireland’s enslaved humans.

Ashling's driving desire is to return home, claim her hard-earned degree, and stake her place in society, but the only way back is through the inter-dimensional travel hub on Mount Olympus, which is jealously guarded by Fallen Angels — the all-powerful and violent gods of mythology. Ashling must put her life on the line to change the status quo; otherwise, there won't be a future for her to return to.

Leading a small group of misfits, Ashling repels an invasion of Giants, tames a ferocious dragon, rescues a besieged Elf princess, sparks a human revolution, forms unprecedented alliances between old enemies, and wrenches control of the kingdom from the Elves. But her arrival has triggered events that will destroy the gods’ sacred mountain, and Ashling must race against Time and Fate to reach the portal hub before her only return route closes forever.

About the Author
Mary Mack (short for McCormack) was born on a U.S. Air Force Base in London and was raised in County Clare, Ireland. She moved to California in her late teens to work as an au pair, and networked with other Irish emigrants in Orange County in the 1980s, in places like The Harp Inn and the Brothers of Saint Patrick. This is where she earned the nickname ‘Mary Mack’.

Night classes at Rancho Santiago College—where she studied journalism and engineering—led to a job in the aerospace industry as an entry-level word processor. Mary’s skills with computer graphics, editing, and desktop publishing quickly caused her promotion to editor-in-chief of the company newsletter.

When the first of her four children was born in 1991, Mary launched into a fulltime career as mother and homeschooling teacher. But the midnight oil burned incessantly throughout the intervening years while Mary studied the subjects that culminated in her first published novel, and wrote stories and news articles, and designed posters for non-profit organizations. She has been published in several local newspapers and two magazines (West 17th and The Home School Court Report), and works as a freelance editor and graphic designer.

Professional memberships include the International Screenwriters Association and the California Writers Club (CWC). Mary taught a year-long screenwriting workshop in 2016, and writes a monthly column on marketing and self-promotion for the CWC’s High Desert newsletter, Inkslinger.