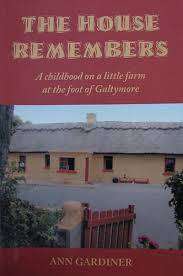 This chronicles growing up on a farm at the foot of the Galty mountains in Tipperary in the 40’s, 50’s and 60’s.  This was a time when the meitheall was a vital cog in farming life and neighbours helped each other out: a time also when people were under the rule and thumb of the Church.   Buy Book Here

This was a more innocent Ireland when visiting each other’s houses at night to play cards or music or tell ghost stories was the only social outlet   School days are examined and the trials of cycling 8 miles to secondary school before entering the strict regime of boarding school.   Dancing to the show-bands of the 60’s in Dublin is recalled and compared with the social life of to-day

Ann Gardiner was born in Burncourt, in Co. Tipperary.   She spent 2 years in America and returned with her husband, traditional box player, Bobby Gardiner who was born near Lisdoonvarna, Co. Clare. They started their new life on the farm at Ann’s old home address. .

Bobby who had previously played with the Kilfenora and Malachy Sweeney’s Ceilidhe Bands had spent 10 years in America including a stint in the American Army. In the early 70’s and 80’s the ballad session circuit was in full swing and Ann and Bobby played for many sessions all over Munster. Some years later Ann  recorded a CD of songs which included a beautiful song called ‘Tipperary’s Hills For Me’   Bobby made a number of traditional C/D’s over the years and still plays at the Bru Boru centre in Cashel  for the summer months.  He has tutored the accordion at University College Cork for over thirty years and also taught in South Tipperary and Waterford.  Most recently he received a Gradam lifetime award for his contribution to Irish music. After their three children were educated and left home Ann wrote 2 books - one about her life growing up on a farm in Co. Tipperary called ‘The House Remembers’, celebrating the major events like Threshing Day, Station Masses, Gambles and Going to the Fairs and the other called ‘Paraffin Lamp Days’ is a collection of short stories dealing with the same era.   Bobby has almost completed a tutor for the button accordion.   They both enjoy music, the Gym, card playing and socializing