As America marches toward a Middle East war, only the intervention by an FBI agent, a CIA agent and a District of Columbia police officer saves the nation from a fate far worse. 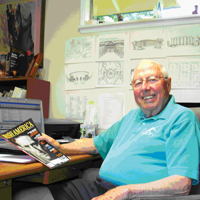