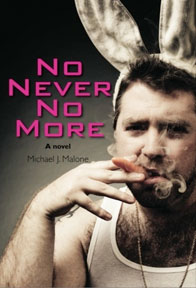 New York City, 1999. Manhattan was undergoing a momentous transformation, with crime at record lows, the city awash in dot-com buzz, and young professionals taking over the city’s sketchier precincts – and pushing their longtime residents further to the fringes. Yet some things stayed the same. Declan Coulter, raised by his fiery Belfast-born mother in an Alphabet City tenement, is a holdout to an earlier era. Buy the Book!

He’s an urban hick who refuses to refer to his neighborhood by its trendy new “East Village” moniker. He’s a rugby player and an aspiring writer, with some success penning an oddly autobiographical children’s book series called Honey Bunny, but no luck getting his novel, featuring the working title The Apathy and the Ecstasy, going. Blending Nick Hornby’s hysterical peeks inside the male psyche and Irvine Welsh’s warts-and-all portraits of the colorful denizens of the urban underbelly, No Never No More portrays Declan’s struggles to repair each of the trashed relationships in his life, including that with his mother, as well as his loathed ex-girlfriend, Tisa, before his 30th birthday arrives. Also on his agenda: finishing the novel, completing his hated “half-a-tat” – an unfinished Irish harp tattoo on his back that symbolizes both his fear of needles and his inability to complete tasks – and getting the upper hand on his growing addiction to the various substances available on the wrong side of Avenue A. From the still-seedy shadows along Tompkins Square Park to the unique bonds between rugby teammates, the sights, sounds and smells jump off the page. A Bright Lights, Big City for the ‘90s, No Never No More introduces one of the more memorable anti-heroes in fiction.

Michael J. Malone’s fiction appears in the 2013 Westchester Review. His journalism has been published in The New York Times, Playboy, ESPN.com, Rugby Magazine and New York Magazine. He writes the weekly “Notes From the Tasting Room” column for Captain Lawrence Brewing in New York and is the author of the non-fiction humor book The New York Commuter’s Glossary. He lives in New York with his wife Susan, son Gavin, daughter Charlotte and cat Luna. No Never No More is the first novel in Malone’s “Tompkins Trilogy.” The latter two, When I Was Punk and Betsy Town, will be published in the near future.