Delaney pulls out all the stops as he tips his hat to two great and all but indistinguishable Irish traditions: the theater and politics. Set in Ireland in the politically tumultuous 1930s, this rollicking tale, chockfull of Irish wit, superstition, and sentiment, features a larger-than-life cast of suitably eccentric characters.

When 18-year-old Ben McCarthy, is dispatched by his mother to fetch home his wayward father, he embarks on an odyssey so wonderfully strange, all-encompassing, and ultimately tragic that it will effectually define his entire life. After Papa McCarthy, a staid and gentlemanly soul, does something as wildly out of character as fall for a beautiful and charming young actress, Ben, too, is irresistibly drawn into the giddy orbit of Venetia Kelly and her Traveling Show. Ben’s bittersweet story plays out against a backdrop of political corruption, personal greed, and high unexpected romance. Expect high demand for this ideal book club selection. 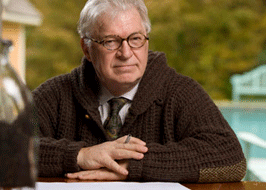 Born in Tipperary, Ireland, Frank Delaney is the author of the novel Ireland, a New York Times best seller, as well as Tipperary, Shannon, and Simple Courage: A True Story of Peril on the Sea. A former judge for the Man Booker Prize, Frank enjoyed a prominent career in BBC broadcasting before becoming a full-time writer. He now lives in New York City and Connecticut with his wife.