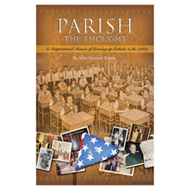 An Inspirational Memoir of Growing up Catholic in the 1960s. In this memoir, Parish the Thought, John Bernard Ruane shares the evolution of his faith as he grows up in a blue-collar neighborhood, attending a Catholic grammar school and serving as an altar boy.
Buy the Book!

He relates tales of the good and bad teachers, as well as priests and nuns who affected the lives of so many impressionable young Catholics. As we sit in this new world which has changed so drastically since our youth, we know we can never bring back those days when life was simpler -- when we had to stand up to turn the channel on the black & white television set to one of the five stations then adjust the rabbit-ears antenna to get a good picture; when we had to walk to the kitchen to answer the phone; when it took about $5 to fill up a car’s gas tank; when most mothers stayed home to raise their kids and most families ate dinner together at the kitchen table; when big city neighborhoods were filled with blue-collar workers raising large families; when most workers had good health insurance, pensions and could take time off from work without being called on a cellphone or blackberry by the boss; when we had to go to the library to research a school project; when summers were filled with the fun of slip-and-slides, running bases on the front lawn, girls with hoola-hoops and boys riding their bikes to the local park to play baseball from dawn until dusk each day only taking a break for lunch and dinner.

We can never bring back those days, but we can take a step back in time and relive them through television shows like American Dreams or books like Parish the Thought.

“Parish the Thought, An Inspirational Memoir of Growing Up Catholic in the 1960s,” is Ruane’s second book. In this memoir, the author shares the evolution of his faith, raised in a hard-working Irish-Catholic family of five children in a blue-collar neighborhood of Chicago. He shares stories of his entry into a Catholic grammar school, experiences as an altar boy, tales of good and bad teachers, as well as the priests and nuns who affected the lives of so many impressionable young Catholics.

The book has enjoyed great success since being launched in June of 2007, receiving wonderful reviews from both critics and readers and the hardcover edition is nearly sold out.  The success has gained the attention of a major publisher, Pocket Books, an imprint of Simon & Schuster, which will publish the paperback edition this fall.

In 1999, ECW Press published Ruane’s first book, The Earl Campbell Story, profiling the life of NFL Hall of Fame running back Earl Campbell and his battle with panic disorder.

Ruane has also written two stage plays and co-wrote three satirical plays, all produced in Chicago from 1985 to 1992. In 1988, he wrote and produced Comedy on Rye for the stage and followed with a five-minute film short, which won the Illinois FilmCam Award. In 1989, he wrote and produced a half-hour television show titled, Deckinger’s Place, which also won the Illinois FilmCam Award.

From 1980 through 1989, he wrote for the Chicago Sun-Times, working alongside heroes from his paperboy days, including Mike Royko, Ray Sons and Jerome Holtzman. His work has also appeared in the Chicago Tribune, Atlanta Journal-Constitution and North Shore Magazine.

For the past 15 years, he has owned and operated a marketing communications company and coached youth sports, coaching basketball, baseball and fast-pitch softball.

He and wife Charlotte recently celebrated their 28th wedding anniversary. They have four children and reside in Roswell, Georgia.
Reviews
"John Bernard Ruane writes about a truly memorable parish, St. Bede’s in the Archdiocese of Chicago. His witty but moving recall of his years growing up is a marvelous tribute to his mother and father and to the parish itself. Chicago priests and parishes have shaped literally millions of Catholics, and all of us now have reason to be grateful to John."  ~Francis Cardinal George, OMI  Archbishop of Chicago

"Too much fun! Absolute nostalgic indulgence!" ~John Powers, author of Do Black Patent Leather Shoes Really Reflect Up?   & The Last Catholic in America