Derek Landy's trademark snappy wit and unforgettable characters come alive once again in the third book of the immensely popular Skulduggery Pleasant series—a volume that readers won't be able to put down. 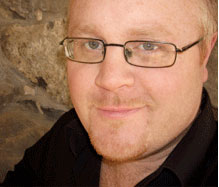