Mad Angels is a collection of Larry Kirwan's plays. They range through subjects like the rock & roll (Liverpool Fantasy/Days of Rage), politics (Mister Parnell/Blood), and boxing (Night in the Garden). All the plays have been produced and the casts/directors/tech staffs/theatres are noted. The plays are all available for production and provide many stirring original monologues suitable for actors' auditions.

Liverpool Fantasy wonders what would have happened to The Beatles, and the world at large, if they'd never made it. This most frequently produced of Kirwan's plays has been staged at the Dublin Theatre Festival and Off-Broadway.

Mister Parnell takes place on the night before the "Uncrowed King of Ireland," Charles Stewart Parnell was cited in a famous divorce case. It is essential reading for anyone interested in either the case or the period. That night changed ireland's course in history and is still having ramifications today.

Blood deals with the three days that revolutionary socialist, James Connolly, went missing in early 1916 and his supposed encounter with Padraig Pearse and Sean MacDermott, leaders of the Irish Republican Brotherhood. Kirwan specualates on what might have happened during the "kidnapping. " And why this most practical of men joined a collection of poets, misfits, educators and pragmatists in a tragice uprising against the might of the British Empire.

Days or Rage takes place in New York's East Village in the mid-80's. It chronicles the descent into violent delusion of Stevie Hero, a rock & roll singer who decides to take one last stab at fame in the company of James Joyce and a Che Guevara like figure. This is a musical containing some songs that went on to become staples of early Black 47 set lists.

Night in the Garden examines Frankie Riley, a "Great White Hope" from Brooklyn and the effect of his rise to fame on his handlers and family. It also deals with the power of the media and the lure of celebrity. 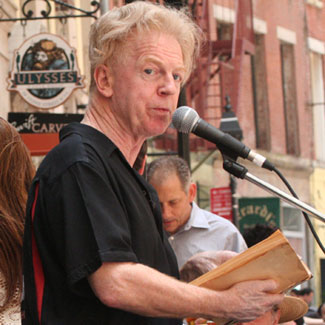 Larry Kirwan (born in Wexford, Ireland) is an expatriate Irish writer and musician, most noted as the lead singer for the New York based Irish rock band, Black 47.

Prior to Black 47, Kirwan and fellow Wexfordian Pierce Turner were the house band in Malachy McCourt's Bells of Hell in Greenwich Village. The music was an amalgam of Folk, Trad, Progressive Rock, Punk, and any other genre that came to mind. The group was one of the few banned from CBGB's; in the words of Hilly they were "too demonic." However, all was forgiven for they played a number of times at the club thereafter. They then led the new wave band Major Thinkers for some years. Their song, Avenue B (is the place to be) became a radio hit whereupon they were signed to Epic-Portrait Records. They recorded an album, Terrible Beauty, that was never released and went their separate ways after a somewhat memorable performance in Irving Plaza on St. Patrick's Day, 1985.

Kirwan has also written and produced eleven plays and musicals, many of which have been performed in the United States and Europe. The plays deal with many topics including Irish history and politics. The most popular however is Liverpool Fantasy, a "what if" the Beatles had broken up while recording Please Please Me and never made it.

Kirwan formed Black 47 with Chris Byrne in late 1989 after a jam in Paddy Reilly's Pub in Manhattan.

Since April 2005, he has hosted Celtic Crush, a radio show on Sirius Satellite Radio that features Celtic artists from a wide variety of genres. He also writes a weekly column for the Irish Echo. He has had three books published, a novel version of Liverpool Fantasy; Green Suede Shoes, a memoir, and Mad Angels a collection of plays. A new novel, Rockin' The Bronx, will be published in Feb. 2010. He is currently collaborating with Thomas Keneally on a musical, Transport.

He is a naturalized U.S. citizen, having emigrated in the 70's.