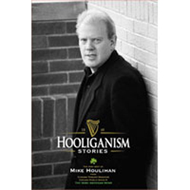 HOOLIGANISM is an anthology of Mike Houlihan’s best columns from The Irish American News, with additional material from the Chicago Tribune Magazine, and Chicago Public Radio. This book captures the best stories from one of Irish America’s funniest raconteurs. Houlihan takes the reader on a picaresque journey as he recounts his travels in show biz as a Shakespearian clown; his days as proprietor of The Hooley-Dooley, an Irish gin mill in Rockaway Beach, NY; his adventures as a theatre and film producer chasing investors; memories of growing up Irish-Catholic on the south side of Chicago; and his day to day tightrope walk as an itinerant actor, father, and husband. Hooliganism also revisits and reinvents several Irish American urban myths and fables featuring a stock company of rogues, scoundrels, and boozers. Funny stuff in ten-minute installments.

Filled with Irish jokes, anecdotes, and preposterous tales, this book is like enjoying a pint of your favorite stout. If you read the whole thing in one sitting you’ll be drunk with laughter. Best to take it slow, one at a time and savor the enjoyment, chuckles, and eccentric wit of Mike Houlihan. The anthology covers the very best of Mike’s stories from 1993-2008, featuring the same friendly style that the Chicago Tribune called, “A natural storyteller’s flair.” The Wednesday Journal said, “Mike Houlihan has been telling stories for a long time…on Broadway, in feature films and on TV.” For six years Mike Houlihan sold out theatres with his one man comic memoir of growing up Irish, GOIN’ EAST ON ASHLAND. Now that same genie has been released from the bottle into this book.

Mike Houlihan is a former features columnist for the Chicago Sun-Times. He began writing the “Hooliganism” column in the Irish American News in 1996 and has since become the comic mainstay for the newspaper. Mike’s no holds barred take on life has entertained as well as outraged readers of the Irish newspaper. Mike began his career as an actor and then writer of plays and films. His memories of growing up as the seventh child in an Irish American Catholic family on the south side of Chicago and his wickedly wacky imagination create an alchemy of funny stories. The Sun-Times said, “Fasten your seatbelts… it’s terrific entertainment. The blarney-blessed author is Chicago’s largest and loudest leprechaun with a universal, nostalgic appeal. He grabs his audience ina warm bear hug and never let’s go.” The Daily Southtown agreed, “Houlilhan’s stories will keep many Irish eyes smiling!

Mike Houlihan is the writer and star of the independent feature film “Tapioca,” also starring Ben Vereen and Tim Kazurinsky.. Mike began his professional career in show business 36 years ago as an apprentice actor with the American Shakespeare Theatre in Stratford, Ct. Mike Houlihan is Chicago’s own “triple threat” writer, producer, and performer whose talents have earned him the respect and confidence of our media community. He is a former weekly features columnist for The Chicago Sun-Times, “Houli in ’da Hood,” and since 1996 has written his humor column in The Irish American News, “Hooliganism.”

Among the films he has been featured in are the Coen Brothers’ comedy “The Hudsucker Proxy” starring Paul Newman and Tim Robbins; 20th Century Fox’s “Rookie of the Year;” “Just Visiting” with Jean Reno and Christina Applegate, written by John Hughes based on the screenplay Les Visiteurs by Christian Clavier and directed by Jean-Marie Poire; “Henry: Potrait of a Serial Killer, Part 2;” in the thriller “Evil Has a Face” with Sean Young; and with Halle Berry in “Losing Isaiah.”

On television he was the recurring character of Pete the bartender on several episodes of “Early Edition;” guest starred on “Chicago Hope;” as well as feature spots on “ER,” “Missing Persons,” “Angel Street,” and “The Untouchables.” Mike also appeared on the PBS Theatre in America series in Eugene O’Neill’s “Beyond the Horizon.”

Onstage he was the writer, producer, and star of MICKEY FINN in the 2000 world premiere production at the Royal George Theatre. Selected scenes from this play were published in “Best Stage Scenes of 2001.” In 2004 he wrote, produced, and starred in TAPIOCA, a comedy experiment, at the Beverly Arts Center, which was the genesis of his film which is currently in DVD distribution.

For six years he entertained audiences as the author and star of his one man comic memoir of Irish Chicago, GOIN’ EAST ON ASHLAND, from 1993-1999, playing to sold-out crowds at Piper’s Alley, The Beverly Art Center, The Irish American Heritage Center, The Royal George Theatre, The Ivanhoe Theatre and The Rialto Square Theatre in Joliet. Also in Chicago he starred in Neil Simon’s hit comedy LAUGHTER ON THE 23RD FLOOR at the Briar Street Theatre.

Mike studied acting at The Goodman School of Drama and the University of Illinois at Chicago. He performed in Chicago with The Organic Theatre, The Chicago City Players, and The Court Theatre before embarking for the East Coast where he joined The American Shakespeare Festival in Stratford, Ct. in 1973. He appeared in the classics at Stratford for four years, primarily in character roles in JULIUS CAESAR, ROMEO AND JULIET, MEASURE FOR MEASURE, TWELFTH NIGHT, MACBETH, THE COUNTRY WIFE, A WINTERS TALE, MUCH ADO ABOUT NOTHING, KING JOHN, and most notably as the Fool in KING LEAR starring Group Theatre founder Morris Carnovsky and as Howie Newsome in OUR TOWN starring Fred Gwynne, Geraldine Fitzgerald, and Eileen Heckart.

He also began performing across the country with the nation’s leading repertory theatres, appearing at The Goodman Theatre in TOOTH OF CRIME, TIS PITY SHE’S A WHORE, and HENRY IV, with the McCarter Theatre in Princeton in O’Neill’s BEYOND THE HORIZON, Tennessee Williams’ KINGDOM OF EARTH, ROMEO AND JULIET, and MUCH ADO ABOUT NOTHING, with Syracuse Stage in O’Casey’s PLOUGH AND THE STARS and Moliere’s TARTUFFE, with The Long Wharf Theatre in New Haven in Tom Murphy’s ON THE OUTSIDE, at the Kennedy Center in Washington in MACBETH and MEASURE FOR MEASURE, in Philadelphia at the Annenberg Center in MUCH ADO ABOUT NOTHING, and with The Folger Shakespeare Theatre in Washington D.C. as Parolles in ALL’S WELL THAT ENDS WELL.

In New York he appeared Off-Broadway in several new plays and made his Broadway debut in Tom Dulack’s SOLOMON’S CHILD at the Helen Hayes Theatre.

In 1978 he founded Penumbra Productions in New York City, an Off-Broadway producing organization where he began to produce and direct theatre. He won the 1981-82 New York Drama Desk Award for outstanding production of a revival for his production of Joe Orton’s ENTERTAINING MR. SLOANE as well as producing and directing several New York and World Premiere productions Off-Broadway; among them Jack Gilhooley’s THE BRIXTON RECOVERY, directed the American Premiere of Neil Donnelly’s UPSTARTS at the Irish Arts Center, and with Chris Hart he produced the New York Premiere of Erik Brogger’s political satire THE BASEMENT TAPES at the Village Gate.

While working in New York he met Malachy and Frank McCourt and together they developed A COUPLE OF BLAGUARDS, which Houlihan produced and directed at The Village Gate in New York City in 1984 and subsequently toured all over the world. BLAGUARDS was selected as a special promotional representative for Irish Distillers International and was the genesis of a series of books written by the McCourts including “Angela’s Ashes”, “Tis”, and “A Monk Swimming,”

In 1985 he returned to his hometown of Chicago to produce and direct Peter Nolan’s political comedy THE 51ST WARD and also produced the Marriott Lincolnshire’s production of the Broadway hit musical BABY at the Forum Theatre. Since returning to Chicago he has produced and directed several television programs and documentaries, most notably “Nolan’s Cracker Barrel” on WLS-TV(ABC) in Chicago and “Takin’ Back Bucktown,” which won the International Television Association PHILO Award for Public Service Media.

Since 1991 he has been President of Mike Houlihan Creative, an advertising, public relations, and marketing firm servicing such clients as The Chicago Board of Trade, Metra, The Brick Marketing Council of Illinois, Illinois Secretary of State’s Office, and The Cook County Assessor.

Mike’s comic commentaries have been featured on public radio in Chicago. He is a frequent guest on Chicago radio programs and has performed his stand-up comedy act at Zanie’s and Barrel of Laughs, as well as several private and corporate functions.