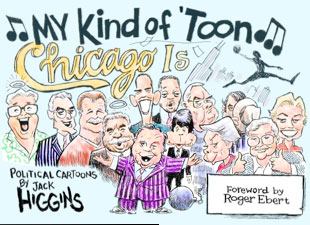 An institution at the "Chicago Sun-Times", his home paper for more than twenty-five years, Pulitzer Prize - winning editorial cartoonist Jack Higgins gathers for the first time in "My Kind of 'Toon, Chicago Is" approximately 250 editorial and political cartoons.

Over the years, he has filed syndicated cartoons from the Soviet Union, Hungary, Ireland, and Cuba. From his front-row seat, he has lately focused on the highs and lows of the Chicago and Illinois politics that produced both the first African American president and a string of corrupt gubernatorial administrations.

Born and raised on Chicago's South Side, my attraction to local politics wasn't by any action of my own, but by the political pull my mother had. That is, the very same doctor's hands that yanked me into this world also delivered Mayor Richard M. Daley.


Fast forward to the present. I can hardly believe it, but I’ve been drawing editorial and political cartoons for over 30 years now, so it looks like it’s time for a retrospective. I started out drawing cartoons professionally on the Daily Northwestern (Northwestern University) in 1978, then I went to the Chicago Sun-Times in 1981, and shortly after that they brought me on board full time (1984). In 1989, I won a Pulitzer Prize for Editorial Cartooning.

I've been lucky to have filed cartoons for the Sun-Times from all over the world, including the Soviet Union, Hungary, Ireland, and Cuba. Who knew? Become a cartoonist, and see the world. I’ve covered five political conventions and Super Bowl XX (the Chicago Bears were there, of course). And, I've been on Good Morning America, Today Show, NBC Nightly News with Tom Brokaw, CNN, Headline News, Fox Thing in the Morning, Chicago’s NBC, CBS & Fox affiliates, and Canada’s CBC Morning.

The portraits that I did of John F. Kennedy during my college years are now part of the permanent collection of the John F. Kennedy Library in Boston. My work has been reprinted in The New York Times, The Washington Post, The Washington Times, Newsweek, Slate, The Chicago Tribune Sunday Magazine, and Mad Magazine. Also, I’ve appeared numerous times in the annual publication, The Best Editorial Cartoons of the Year.


I’m a graduate of the College of the Holy Cross (Worcester, Massachusetts), and have a degree in Economics (really), but my passion is cartooning. I started to hone my craft while I was in college. No, not by doodling in Economics class - I took an elective in drawing - and once I started there was no turning back.

My wife, Missy, and I are happily married. And at current count, we have five kids. We live outside of Chicago, in one of the ‘burbs, but I am and I will always be a Chicagoan.

Chicago is My Kind of ‘Toon

1996
Illinois Journalist of the Year

1986
Pulitzer Prize Finalist for Editorial Cartooning
Contact me at This email address is being protected from spambots. You need JavaScript enabled to view it..